Skeletal muscle tissue: what is it and how does it work? | YouCoach Skip to main content

Skeletal muscle tissue: what is it and how does it work?

Skeletal muscle tissue: what is it and how does it work?

There are different types of muscle tissue. In the widest meaning of the term, the muscle tissue allows the voluntary and involuntary movements of the organs of the body. The property of the muscle tissue involved in this task is its ability to contract, that is, to shorten its length.

The striated skeletal muscle will be described here, while the smooth and cardiac muscle types will not be considered.

WHAT IS THE STRIATED SKELETAL MUSCLE 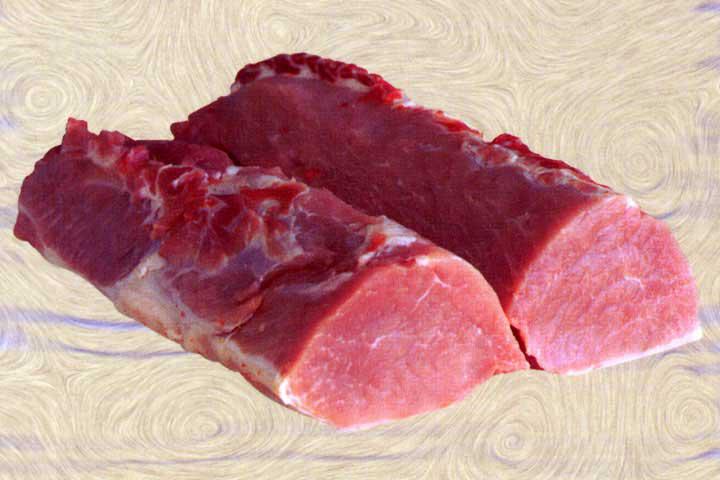 To imagine the organization of a skeletal muscle we can use the image of a pork loin. Indeed, meat is just a muscle tissue and the structure of any piece of meat is not different from that of human muscle tissue.

The base element is the muscle fibre, which is a unique cell with many nuclei resulting from the fusion of various single cells named polynuclear syncytium. Its thickness ranges between 10 and 100 μm but it can reach up to 50 cm in length. Because it is the base element, it is the sum of the contractions of the individual fibres that permits movement.

Coming back to our piece of meat, we can observe that it contains a number of groups of fibres surrounded by veins of clearer tissue. This tissue is called interstitial connective tissue and has important structural and support functions, as mentioned before. There are three types of interstitial connective tissue:  the epimysium, that is a layer that encloses the whole muscle and separates it from the surrounding structures; It can be observed on the surface of the pork loin. It is a rather dense tissue resistant to lengthening. Enclosing each fascicle of fibres is the perimysium, that has similar characteristics as the epimysium. It also delimits the path of the blood vessels and of the neuronal structures in the muscle. It is visible if we observe a cross section of a piece of meat.

The endomysium, which encloses each muscle fibre is not visible to the naked eye. The endomysium is a more fragile tissue compared to the other two types, and it represents the zone where the metabolic exchanges between the capillary system and the muscle fibre occur. It also plays an important role in the transmission of the contractile force generated in the muscle towards the tendon and, indirectly, to the joint.
To summarize, the striated skeletal muscle is composed as follows:
The contractile function of muscle is enabled by the repeated shortening of the sarcomeres of each individual fibre. These contractions are transmitted along the muscle belly through the different types of interstitial connective tissue to reach the tendon. This process allows the active articular movement to occur. 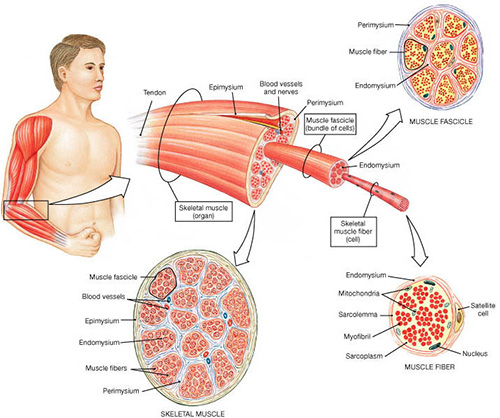 The first figure represents a pork loin. In the above figure the structure of the skeletal muscle tissue is described schematically.
HOW DOES MUSCLE WORK?
In order to contract and generate movement, a muscle needs to receive a stimulus from the brain, which acts according to the choice of a motion plan suitable to the context and to the final aim of the movement. This impulse is transmitted to the muscle by a nerve. Each muscle has a very precise innervation, which means that each muscle receives nervous stimuli from specific structures whose damage inevitably causes muscle dysfunction.

The neural  impulse from the brain is transformed into contraction of the muscle fibres by a series of cell reactions induced by the neuromuscular junctions.

The skeletal muscle can undergo three different types of contraction:

These three types of contraction occur in every moment of daily life and, consequently, on the field.
The duration and the force generated during contraction of the fibres depend also on the size of the motor neurons that innervate them.

A wide range of intermediate profiles exists between the two types described above.

In general, as a  rule, during a movement slow twitch fibres are involved first to control the segments engaged in low intensity, durable contractions, and only at a later stage fast twitch fibres are engaged to produce increased force for a short time.

A most important property of the neuromuscular system is plasticity: in fact, it is able to adapt to the applied external loads and environmental demands. If a muscle is stimulated correctly it reacts by increasing its force and trophism. Muscle hypertrophy results from the increase of protein synthesis inside the individual fibres, that increase in size but not in number. Instead, the adjustments of the nervous system are responsible for the increased force of a muscle. Among them, neural disinhibition and an increased activity of the cerebral cortex are worth to be mentioned, as well as the higher degree of inhibition of antagonist muscles, which allows agonist muscles to generate more force.

Concentric and eccentric exercises should be combined to increase muscle force and mass. Eccentric exercises seem to be useful to prevent muscle injuries. In high resistance training exercises the muscle undergoes very high loads for a few times, while in other low resistance exercises loads are reduced and the amount of contractions is higher.
The above mentioned principles are general ones. Each training program has to be calibrated to the skills and exigencies of the individual and be drawn by a competent professional. 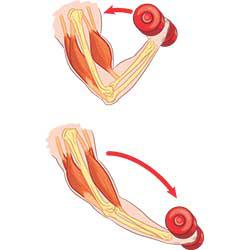 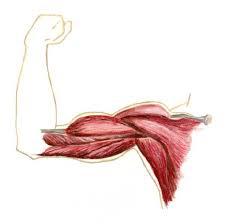 The above pictures illustrate the concentric, eccentric and isometric contraction of the brachial biceps muscle and of the other flexors of the elbow.
AGONIST-ANTAGONIST, SYNERGIST, AND MONOARTICULAR-BIARTCULAR MUSCLES
You often hear about agonist and antagonist muscles. The distinction between agonist and antagonist muscles is essential to understand in detail the development of a muscle in proximity of an articulation.

Agonist muscles are primarily responsible for the start and execution of a movement. For instance, the hamstrings are the agonist muscles in the flexion of the knee and extension of the thigh.

Antagonist muscles oppose the movement of the agonist muscles. Referring to the hamstrings, the quadriceps muscle can be defined as their antagonist.

This picture illustrates the four heads of the quadriceps muscle in contraction ( in blue), the extensors of the hip (in red) that are the antagonist muscles of the biceps and therefore are lengthened. 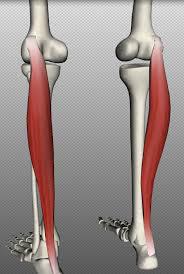